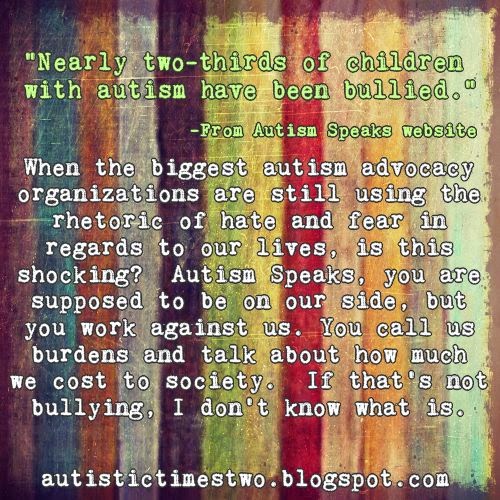 Image:  Light colored text reads: “Nearly two-thirds of children with autism have been bullied.” -from Autism Speaks website When the biggest autism advocacy organizations are still using the rhetoric of hate and fear in regards to our lives, is this shocking?  Autism Speaks, you are supposed to be on our side, but you work against us.  You call us burdens and talk about how much we cost to society.  If that’s not bullying, I don’t know what is.  Text is on multicolored faded vertical stripes.

Apparently, Autism Speaks is celebrating ten years of speaking for Autistics while actively silencing and stigmatizing us.   Recently, they posted a list of things they have accomplished in the last ten years on their website.   As you might expect, it was extremely problematic, disrespectful, inaccurate, even full of some outright lies, and most importantly and predictably, without the input or wisdom of any Autistic people. Here, I do my best to pick apart what they have said and offer my own suggestions and input.

I’m Autistic after all.

Autism Speaks speaks for us, and my response follows.

“2. Direct screening suggests that autism’s prevalence may be even higher.

In a landmark study funded by Autism Speaks, screeners went into schools in South Korea and found 1 in 38 children affected by autism, most of them previously undiagnosed. Autism Speaks is now working with  the CDC to conduct a similar direct-screening study in the United States. “

“It doesn’t mean all of a sudden there are more new children with (autism spectrum disorders),” said co-author Dr. Young-Shin Kim of the Yale Child Study Center. “They have been there all along, but were not counted in previous prevalence studies.”

Do you even know what autism is?

“3. Autism can be reliably diagnosed by age two.

Early intervention can  change underlying brain development and activity. It’s also cost effective as it reduces the need for educational and behavioral support in grade school and beyond.”

Though children with  autism vary in how far they progress with  behavioral therapy, we now have solid evidence of its benefits. This has enabled Autism Speaks to successfully advocate for health coverage of behavioral health treatment, now the law in 38 states and counting. Now many families are getting desperately needed therapy that was once denied.”

“6.One third of children and adults with autism are nonverbal.

Autism Speaks continues to support research on  the best uses of assistive communication devices and has donated thousands of the devices to individuals and families who could not otherwise afford them.”

You can do more, Autism Speaks.  You can stop trying to fix Autistics, start respecting that all communication is valid, and start supporting more non speaking Autistics with access to AAC instead of spending millions to try to prevent us from being born.  How many  more Autistic people could you help if your focus was on support instead of prevention?

An Autism Speaks-funded study dispelled the belief that nonverbal children with autism who don’t speak by age 5 will remain nonverbal for life.”

Research by the Autism Speaks ATN revealed that half of children with autism have GI disorders and the pain can  worsen behavioral symptoms. The Autism Speaks Autism Treatment Network has developed effective treatment guidelines for pediatricians and tool  kits for parents.

Thanks to research funded by Autism Speaks, we now have evidence-based medical guidelines and tool kits to help parents improve the sleep of those with  autism.

10. As many as one third of individuals with autism have epilepsy.

The potentially dangerous seizures are not always obvious without specialized testing.

11. Autism can affect the whole body.

Seizures, disturbed sleep and painful GI disorders are just  some of the medical conditions commonly associated with autism. The Autism Speaks Autism Treatment Network is dedicated to advancing a “whole person” approach to autism healthcare.”

8-11.  Co-occuring conditions are NOT Autism.  Yes, it is important to address and acknowledge the medical needs of Autistic people, but do not confuse separate diagnoses with autism.

Autism Speaks’ MSSNG program is changing the future of autism through the genome sequencing of thousands of affected families. Already, this  work, which is being stored on  the Google Cloud Platform, is producing medically valuable information and identifying targets for the development of new autism medicines.”

Experts once believed that autism was almost entirely hereditary. Then research with families participating in the Autism Speaks Autism Genetic Resource Exchange showed that non-inherited influences on early brain development account for nearly half  of a child’s risk for developing autism.”

These factors include maternal infection and high exposure to air pollution during pregnancy. And we now know that prenatal vitamins with  folic acid can  reduce the risk of autism if taken before conception and through pregnancy.”

Image: White text outlined in black reads “Bro, do you even science?” Text is on photograph of Bill Nye and Neil deGrasse Tyson who both look incredibly annoyed as they sit in front of two microphones at a table.

“15. Nearly half of those with autism wander or bolt.

Autism Speaks has taken the lead in promoting wandering prevention and recovery through the funding of programs that increase awareness, train first responders and teach water safety.”

Resources should be focused on accepting all communication, and giving Autistic children access to AAC and the ability to develop self-advocacy skills instead of just being trained in compliance.   Many times Autistic children wander and bolt to avoid situations that are overwhelming or hostile.

First responder training, while seemingly a worthwhile goal RARELY works.  If it did, Disabled people would not be disproportionately affected by police violence.

Teaching water safety is definitely something that could benefit Autistic children. Autism Speaks, can you invest some of the money you are using to prevent people like me from being born and put it back into our communities so that more Autistic children will be safe now?

“16. Nearly two-thirds of children with autism have been bullied.

Autism Speaks has partnered with  the National Center for Learning Disabilities and others to raise awareness and combat bullying of special-needs individuals.”

“17. Most adults with autism (84%) remain living with their parents.

Autism Speaks is advocating for federal and state policies that will increase community living options for adults with autism.

18. Nearly half of 25-year-olds with autism have never held a paying job.

Autism Speaks is working to increase vocational and post-secondary educational support for young adults with  autism, and is working with employers to expand job opportunities.

19. Each year, an estimated 50,000 teens with autism age out of school-based autism services.

Autism Speaks continues to work with  public and private partners to provide the support that individuals with  autism need to successfully transition into adulthood and become valued and valuable members of their communities.”

17-19.  How are you doing this?  What programs are you developing to put in place to help us?  Are they led by Autistic people?  Are the things we want considered or are you talking about us, without us again?

These costs, which increase with  intellectual disability, place a tremendous burden on  families and society, but can  be dramatically reduced with high-quality interventions and adult transition support.”

(I also think it’s important to point out that if you don’t over-therapy your kid to the point of not allowing them to enjoy their childhood, the cost of raising your Autistic child will go down a whole lot. )

We are more than burdens on our families and society.   You talk about Autistic people in such disrespectful and dehumanizing ways.   Your hateful rhetoric has real world consequences.  So much that The Autistic Self Advocacy Network has had to create an anti-filicide toolkit in the hopes of preventing more of our parents and caregivers from killing us!

When you call us burdens, and reduce us to a dollar amount, tell us that we cost society too much money for existing, there is blood on your hands, Autism Speaks.

People are listening to you, and what you have done with that great responsibility is to devalue our lives and tell the rest of the world that we don’t deserve to be in it as we are.
You have the power and the resources to change the way the world sees Autistic people.  We, along with our families are asking you to take that power and make the world a better, fairer, more accessible and friendly place for Autistic people.  Stop punishing us just for existing.  We are more than an inconvenience to you.

Autism Speaks, the time for you to shut up and listen to Autistic people is long overdue.